Built in 1886 to be the Notre Dame of Indochina, Hanoi’s St. Joseph’s Cathedral became the symbol of French domination over Vietnam for 70 years.

Construction of the stone-slab Roman Catholic Church near Hoan Kiem Lake in Hanoi’s Old Quarter began immediately after invading French forces coerced Vietnam’s empress dowager Nghi Thiên to place prince Nguyễn Phúc Ưng Kỷ on the throne at age 20, delegitimizing the rule of his younger half-brother Hàm Nghi, Vietnam’s rightful ruler who had fled into the mountains to lead the insurgency against the westerners.

To construct the anchor of what would be French’s offensive to convert Buddhists to Catholicism, the invaders demolished the 800-year-old Bao Thien Pagoda, one of the “four great treasures” of the Annam region. Built with 12,000 kilograms of bronze, the 13-story tower built in 1,057 survived a Chinese invasion in 1426 and a collapse in 1542, but finally met its end at the hands of the French.

The cathedral became the base of the Archdiocese of Vietnam, which today has 400,000 Catholics, and was an active church until it was closed in 1975 at the end of the Vietnam War. It would not host a mass again until Christmas Eve 1990.

Today, the cathedral is both a thriving church with masses several times and a day, the preferred spot for Catholic weddings by young Vietnamese and a must-see stop on any tour of Hanoi.

While open to the public between masses, lights are turned off, dampening some of its beauty for camera lenses. But the delicate artistry of the stained-glass windows – made in Franch and transported to Hanoi in the 19th century – stand out in any light.

So too the towering vaulted ceilings, with their Neo-Gothic arches and symmetrical lines.

The nave is weathered and the sanctuary shines from gilt-trimmed wood. A statue of the Virgin Mary is kept in palanquin, according to the local custom, and stands to the left of the nave.

Sunday 6 p.m mass is the best time to go, with an overflowing congregation spilling out into the street and the sermon broadcast on speakers outside for the faithful. 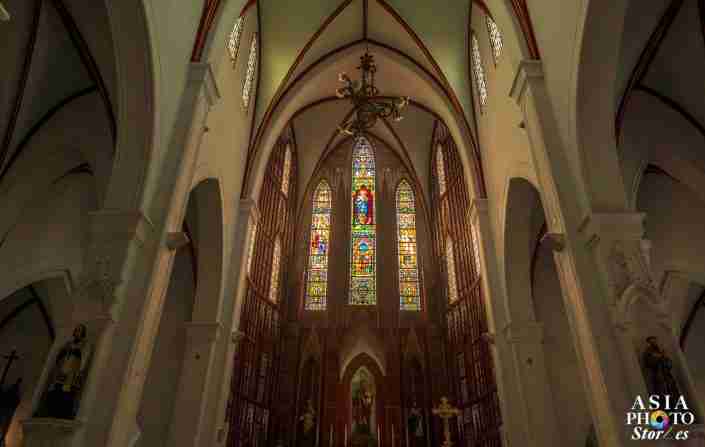