With its world-leading numbers of skyscrapers, it’s easy to assume that Hong Kong is a faceless urban jungle, paved over in concrete, glass and steel. But with so many people packed in so tightly, the human spirit has found ways to blossom through the cracks in the sidewalk.

Nowhere is that more evident than in the Chinese SAR’s art community. Hong Kong already is home to a panoply of world-class, international art galleries and exhibitions. But its streets themselves have become a museum, thanks to artists like Invader and Messy Desk who have turned entire buildings and alleyways into their personal canvases.

Rather than snuff out graffiti artists, Hong Kong’s government has embraced street art, putting its backing behind organizations like HKWalls, a non-profit arts group that creates opportunities for local and international artists to showcase their talents through street art and culture.

HKWalls holds an annual street art festival in Hong Kong each March, as well as year-round programming that focuses on artists’ career development and raising awareness through the arts.

After successful ventures in the expat-heavy neighborhoods of Stanley Market and Sheung Wan in 2014 and 2015, HKWalls set it sights on transforming the working-class district of Sham Shui Po in 2016 and secured a partnership with the American footwear company Vans. In the months leading up to its yearly festivals, representatives approach neighborhood residents, asking tenants, landlords and shop owners for permission to use their walls.

On my January weekend trip, I stopped in one of of the most “Insta-famous” of these street art hubs, Sheung Wan where just a very small slice of Hong Kong’s massive street art canvas was on display.

Tank Lane, a tiny “street” of stairs leading up to Square Street, is home to a portrait of legendary Bruce Lee. The mural was created by South Korean artist Xeva as a tribute to the superstar. But the photorealistic painting is just one of the many impressive artworks by international artists there.

On Hollywood Road, French artist Hopare has left his signature among bright geometric patterns on walls and a colorfully covered school where children were introduced to wall painting.

The owners of the Rich View Terrance have made their building the most famous condo block in the area. Its rainbow-pattern walls on Square Street were created by Pasha Wais as part of Current Projects, the surrounding section of Rich View Terrace is covered entirely by diagonal shapes painted in a spectrum of colors.

Up the hill the woman in purple – painted by Indonesian artists Jecks and Bou – had her fingers crossed, perhaps hoping she’d get to ride away in the sports car parked next to it.

Heading back down Square Street, I passed the qipao-dressed woman painted by Hong Kong illustrator Neil Wang for HKWalls 2018 as well as the bit of random images of the four seasons by an artist named Holski.

It will be interesting to see how Wan Chai is transformed by this year’s festival. I look forward to returning to find out. 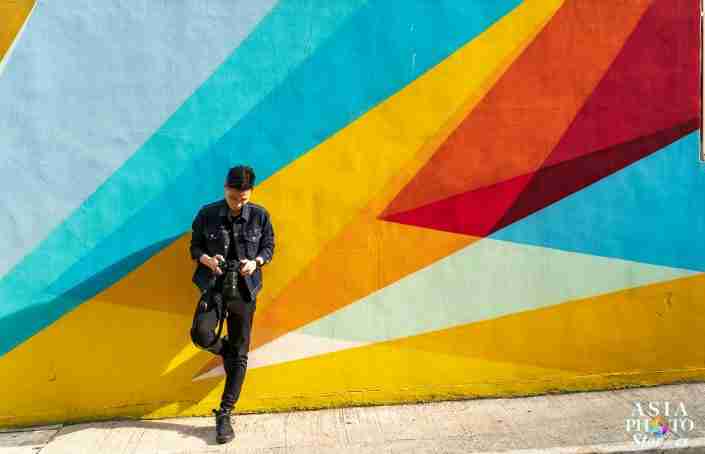 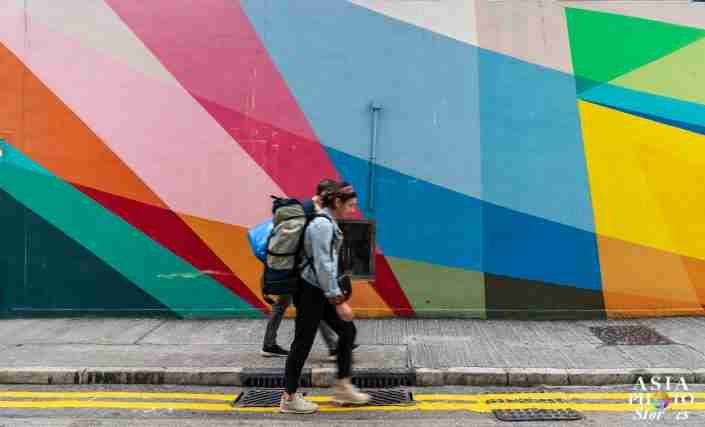