For 851 years, an O-torii Gate has stood as the portal to Japan’s sacred Itsukushima Island. But, for the indefinite future, the current version will be covered in tarp and scaffolding, making this a good time to review the history of the vermillion gate to what today is known as Miyajima Island.

Part of Itsukushima Shrine, a UNESCO World Heritage Site and one of the most-revered places in Japan, the Grand Torii has been photographed millions of times and, in many ways, has become the symbol of Japanese cultural heritage. While torii gates – both meager and grand – can be found at nearly every shrine and temple in the country, none has captured the imagination like the engineering marvel that seems to float in the sea in Hiroshima Province.

The first O-torii was built in 1168 and rebuilt seven times, most recently in 1875. On June 3, 2019, an extensive renovation project began that saw the gate covered in a semi-transparent tarp and fitted with scaffolding. A bridge from the beach is slated to be built on Aug. 25 to allow work crews and equipment to reach the site during high tide.

No timeline has been given for completion of the work. It’s been there for 851 years, so there’s little appetite for rushing the job. The photos seen here are from April 2019, taken during two days spent visiting the island.

The original gate, conceived as a pier through which all migrants to the island had to pass, stood on just two “legs”. In 1547, a rebuilding saw engineers switch to the Ryobu-torii style, which is a wooden Shinto gate design marked by four supporting pillars and two additional columns. The design has remained the same since.

Contrary to popular assumption, the O-torri’s supports are not driven deep into the seabed. In fact, the 60-ton structure stands under its own weight.

The box-shaped upper part of the great Torii is filled with seven tons of stones, each no larger than a human fist. Custom-crafted wedges are driven into the joints between the pillars and roof, acting as shock absorbers to the movement caused by waves and even earthquakes, balancing both the pillars and roof. The sea-level section is strengthened by pine stakes with a second foundation made of stone.

The gate’s roof is thatched with Japanese cypress bark and the entire body coated with vermilion lacquer, the same that is used at the shrine onshore, giving both a distinctive look and protection from corrosion.

Whether day or night, high or low tide, the O-torri dominates the shoreline of Miyajima (“shrine island”). It can be seen peeking over the roof of Istukushima Shrine when walking along tiny town’s main road. Tourists can walk out and touch the mammoth orange pillars during low tide and, at night, the beach is shoulder to shoulder with tripod-toting photographers and cellphone shutterbugs.

It’s hard to resist the urge to find yet another angle of the massive gate to photograph.

The best time to photograph the gate, of course, is during high tide, when the entire structure seems to float on the water’s surface, an illusion made even more real by shooting 30-second exposures on a tripod. The sun sets directly behind the gate, making sunset shooting a bucket-list item for any photobug. The sunstars at F16 alone are worth the price of admission.

After dark, the lights go on and the vermillion color turns a less-attractive yellow that’s hard to make good in just about any photo. But the cruise boats love it, passing through the pillars much like the ancient pilgrims who came to the sacred isle.

Burials are still not allowed on Miyajima, although the monks of Itsukushima have lifted the prohibition of allowing no deaths or births on their holy land. That’s why the O-torii was originally built as a pier:  to allow officials to screen any incoming passengers for terminal illnesses and pregnancy.

But the Grand Gate also was considered the border between the human and spirit worlds.

Taruhito, the Arisugawa no Miya imperial prince, first painted the plate on the gate, with the sun and the moon placed on the east and west sides of the roof. Because the northeast is considered to be the demon’s gate in Feng Shui, the painted sun is said to block the evil spirits emanating from it.

The world will now have to wait to see what emerges from under the tarp. 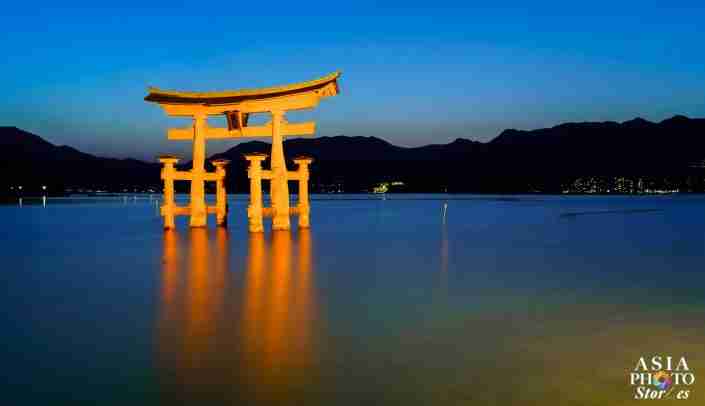