This photo story originally appeared on the Feb. 12, 2017 cover of the Bangkok Post’s Sunday Brunch magazine. They photos have been re-edited for 2019.

The roof rack on the songthaew was built for backpacks, but on this trip into town there was only one. The pink metallic roller bags and airline carry-on had to ride with the passengers. There simply way no way to tie them down.

The back of the converted pickup truck this day was a microcosm of what Vang Vieng has become. No longer Laos’ unbridled, gap-year party stop, this day it attracted a retired Australian couple, a middle-aged Canadian photographer, two South Koreans office women and a 21-year-old backpacker. She looked a bit thunderstruck at the company she was keeping.

“It’s a bit of a different crowd now,” says Joseph Foley, the 70-year-old owner of the Maylyn Guest House who claims to be the longest-serving expat in Vang Vieng. “Now we get a lot of older people, more mature.”

Four years ago, this taxi into town from Vang Vieng’s southern bus terminal would have been brimming with unwashed, braided-hair, shorts-and-tank-topped teens and twentysomethings. It would have made only one stop – at the main hostel in this central city 160 kilometres from Vientiane – and would not have been free.

Today, it stops on the main road just past the disused U.S.-built runway that slices this Lao shantytown nearly in half. The Aussie couple departed for the town’s first “upscale” hotel, the Canuck to a “flashpacker” guesthouse on the river, the Koreans to the waterfront boutique resort and the backpacker… well, the hostel is still there.

Welcome to the new Vang Vieng, a kinder, gentler version of one of Southeast Asia’s most infamous hotbeds of hedonism. Like a Hollywood starlet, this ramshackle blotch on a pictorial panorama of jagged mountains and the languid Nam Song river lived fast and died hard. It was knocked from its perch atop the list of must-do stops on the Banana Pancake Circuit nearly overnight

Twenty-seven deaths of young westerners in a year will do that.

A River Runs Through It

In this case, it is the Nam Song river, a meandering estuary that carves a watery route through the karst rock formations that rim the hunter green countryside. Just before the turn of the millennium, a local farmer inadvertently made the river what it is today when, to give his farmhands a break, he tossed a few tractor tyres into the back of a pickup and offered the weary a leisurely float down the river.

Tubing was born. And Vang Vieng was never the same.

By 2001, tubing had become an industry. Rickety bars opened on the river banks and proprietors strung up crude ziplines and water slides and let anyone try their luck for free. Owners cranked up the music, hired foreigners illegally to pass out shots to tubers floating by and mixed up shakes and drinks laced with opium and mushrooms.

Vang Vieng may have been founded in 1383, but it was tubing that put it on the map.

“To see Vang Vieng metamorphose into this thing where backpackers didn’t even know they were in Laos really was sad,” says Stuart McDonald, founder of travel website Travelfish. “The places is a destination that makes itself. Why do you need a party to make people come?”

Dozens – perhaps hundreds – of young Brits, Aussies and Swedes cracked their skulls diving into rocks, overdosed, drowned or poisoned themselves on buckets of “Lao Lao” grain alcohol brewed in the back of the bars and served up in cheap buckets to tourists from 2004-12.

Locals began calling the hoards of drunk youngsters “the zombies”. They’d stagger back from the river bank and bars bandaged, bleeding and drunk from their misadventures. Clothing was optional, with the guys bare-chested and the girls only covering what modesty required.

It mortally offended the conservative locals. And those who once bathed, washed and fished in the Nam Song forsook it, convinced it now was haunted with the ghosts of the many dead kids.

That didn’t mean they stopped taking their money, however.

More than 1,500 households at one point were invested in a co-operative to buy and rent out tubes. Much like Pattaya’s bright lights in Thailand draw men and women from poorest Isan, the lure of good-paying jobs drew impoverished Lao farmers to work in the bars, hostels and restaurants. It was a classic Catch-22: The natives hated everything Vang Vieng had become, but were too dependent on it to change things.

The Communist government ended up doing it for them.

In 2011, tiny Vang Vieng hospital reported 27 foreigner deaths, most of them under the age of 25. Doctors reckon there were many more, as patients with anything as serious as a broken bone were transferred to Vientiane.

After a 26-year-old Aussie died on a zipline, his mum launched a campaign to bring regulation to Vang Vieng’s watersports industry. When two more Australians died that year, the country’s “60 Minutes” news program ran an expose called “Death in Paradise” in March 2012.

Foreign pressure came to a head at an international summit that summer. Within hours after the meeting’s close in August, the hammer came down on Vang Vieng.

“The prime minister called a meeting and he said ‘we have a big problem because of all you greedy people, so we’re shutting you down’,” said innkeeper Mr Foley, whose wife attended the session. “But all that really happened was, for once, they enforced the law.”

Overnight, 24 riverside venues were shut down and eventually torn down for violating existing regulations, operating without licenses and serving unsafe drinks to customers. The ziplines were cut and the “slides of death” dissembled. A midnight curfew was enforced. Now it was music off and lights out.

Business, predictably, plunged. The 800 tubers a day turned into 150 by the end of 2013 as word got out that the party was over. “It was pretty chilled out,” recalls Gavin Cox, manager of a Bangkok bar who visited in 2013. “I went there expecting the worst. I had read about the hellhole it had become, getting listed in “Top 10 Worst Destinations” and the like. But I was surprised because it was not that bad at all. There was hardly anyone around.”

But a funny thing happened on the way to the poor house: The immensely popular South Korean reality TV show “Youth Over Flowers” set up shop in Vang Vieng and opened a whole new market for the former bastion of backpackers. Suddenly the town was awash in Asian tourists, all eager to mimic the mischief their idols had got up to in Laos.

An estimated 140,000 tourists are expected to visit Vang Vieng this year, half of them South Korean. They are everywhere in their matching floral ensembles and straw hats. They’re the ones paying 6,500 baht a night at the Riverfront Boutique Resort, opening karaoke bars and packing into restaurants where only Korean is on the signs and menus.

“Vang Vieng successfully pivoted toward a lot of package tourism from Korea, China and even Thailand, so there’s been quite a big change from the party scene to tour bus kind of scene,” says Mr McDonald. “Business is thriving and there’s a ton of new places to stay.”

That’s not to say there are no backpackers or parties in Vang Vieng. After the initial crackdown in 2012 – which banned all tubing and shut down all the bars – the government eased up and gradually let it return, albeit it with a lot more regulation.

“It’s been a stoner’s place forever, and that scene is still there,” says the Travelfish founder.  “But with the partying toned down, it’s better positioned to become something more sustainable.”

“Spiritually, Vang Vieng hasn’t changed that much,” says Mr Foley. “The biggest thing they did was get rid of all the free zip-lining and slides, all the mayhem on the river.”

Today there are 12 bars along the Nam Song, but only three can open at one time and only for three hours each.

“When one bar closes for the day, they just move to their next one down the river,” a tour guide who goes by the foreigner-friendly name of Sam said.

But the music is lower and the bars must close by 6pm. It all makes enjoying nature on the river a much more peaceful pursuit.

The same applies in town. All but two bars must close by midnight, the most popular among them being the Sakura club made famous by the Korean TV show.

There are still places to get a drink, of course, just as there are places to buy drugs. But the large “Happy Pizza” sign outside one main road eatery now refers more to mood of the chef than the intoxication level of the diners.

What has replaced the ravers and stoners are older, more-affluent, ethnically diverse visitors. Tourists in their 50s and 60s who wouldn’t have been caught dead in Vang Vieng five years ago are now coming for the reason that people first came to the area: nature.

Even the backpackers are changing. Amalia and Emili, two Greek women spending six months in Laos, devoted a month of their time to Vang Vieng. They said they came for the mountains, not the mushrooms.

The two women were joined on a recent daytrip by a mid-30s German man and an early-50s American on an eco-tour that would take them trekking, caving, zip-lining, kayaking and, of course, tubing.

This is the type of ecotourism that guide Sam says is the way forward for Vang Vieng.

“It’s a bit slower now than it used to be, but people spend more money,” he says. “I now do tours every day.”

It turned out that the tubing and caving were simultaneous. Tourists plop themselves into the rubber tire liner, then grab hold of a rope that runs through a watery cave with a perilously low ceiling. But the only danger is getting overrun by mobs of singing South Korean salarymen going the opposite direction.

Amalia and Eleni alone did the zip-lining, but this was no jerry-rigged riverbank affair. And it wasn’t free like in the old days.

“It’s always been somewhere that has appealed to the outdoorsy types, with its rock-climbing, blue lagoon, cycling, organic farms,” says Mr McDonald of Vang Vieng.

It’s beautiful,” recalls bar manager Mr Cox. “The hills and valleys and rivers and caves. It’s fantastic for exploring and getting in a breath of fresh air which, when you’re living in Bangkok, nothing is more important than that.”

The signs are everywhere. On the riverfront, a new hotel is rising seven stories, blocking out the view of the Nam Song for many in downtown. Thai and Chinese money is pouring into the city and more hotels are opening every day.

“We already are hearing complaints about the amount of concrete going up, and it’s my personal hate as well,” says another tenured guesthouse owner, who would speak only anonymously out of fear of reprisals from Vang Vieng’s powerful interests.

“They’re taking something quite charming and pushing it up-market. Franchise accommodations and restaurants are coming in. What was a charming nice little backwater is being lost forever.”

Mr McDonald, who first visited Vang Vieng in 1994 when there were two places to stay, also expressed fear of the idyllic nature resort being urbanized.

“Once one big project like the new hotel goes in, it becomes the thin end of the wedge. Soon there will be three or five of them and then that’s it. It’s like Thailand did: ‘Pick a new island and pave it over’.” 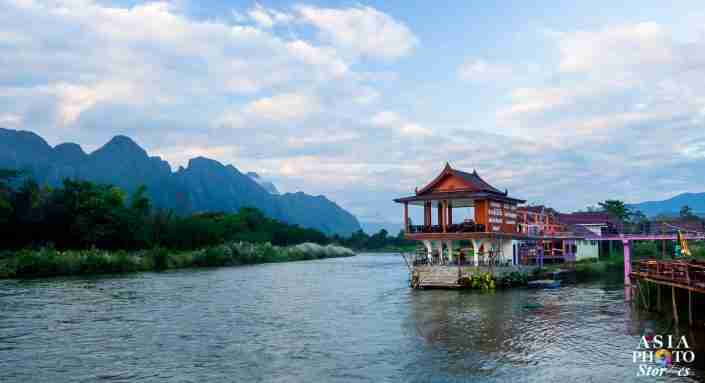 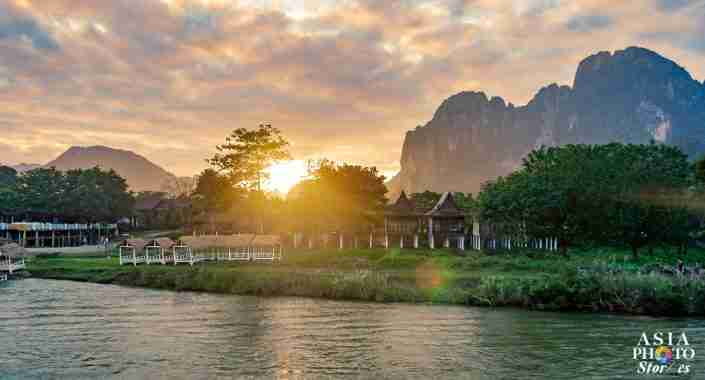 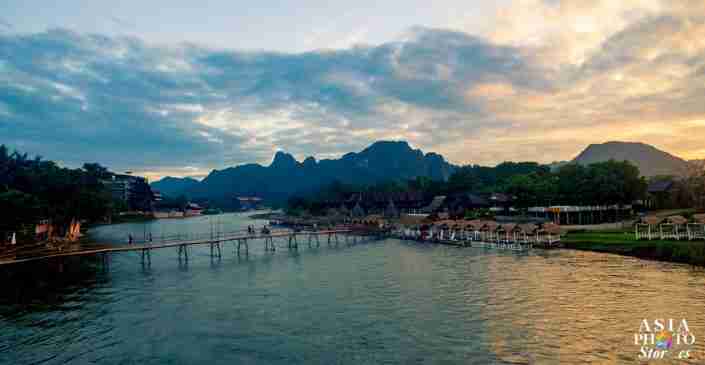 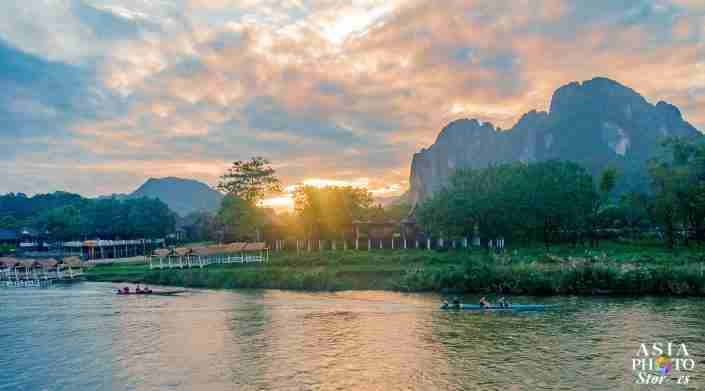